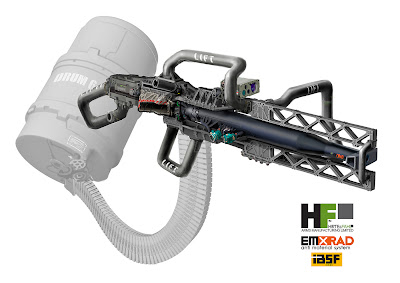 this one was my first and really the only design we did for the cannon the amp suit carries. my thinking was that it's based around a 20mm aircraft weapon, that's been modified for use by the robotic humanoid AMP suit. hence the somewhat fabricated appearance and the big welded grab bars. this design was modified, according to jim's needs, to the final thing seen in the film.
Posted by Aaron Beck at 4:05 PM