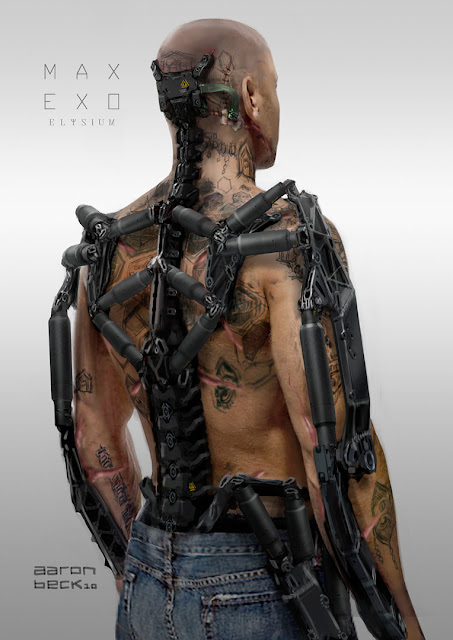 No word yet on artwork clearance so in the meantime I'll repost this already released design.
This was the final design I did for Max's exo-frame.

It was pretty sweet to work on a brief so close to ideas I had been thinking about since I was a kid. I've always loved the idea of exo-skeletal 'bolt on brawn', and thought that the best kind would be something that interfaced with an already nano-engineered body. Ports in the skin and muscle would allow the frame to connect directly to the bones, supplementing the existing body, instead of relegating the wearer to simply being a pilot. Neills concept was a little more visceral, involving bolting the frame directly to the bones. Which was a hell of a lot of fun to design. Originally the bones and tendons of Max were to be strengthened as well, which left lots of brutal laser stitched scars over his body.

With the design of the exo itself, I decided to use pistons basically because they look cool. I thought it would look the most visually exciting, seeing them extend and contract, in a way that servo motors can't match. I have a somewhat rationalised theory of how it would actually work, based on the idea of triangulation of the floating elements, and triple-section internal electric gear driven pistons with 2 axis control at each end to create a braced and mobile stand alone frame (basic pistons with high articulation rod ends were used on the actual prop, and these of course would just dislocate your joints if the suit was 'real', but they were necessary for getting the prop to work). And look cool it did! Seeing the nearly finished prop in action at Weta was an incredible thing. I shot some footage on my iphone that I hope to share at some point.

Speaking of the prop, the work done by the team at Weta Workshop was incredible. Because it's supposed to appear to be bolted to the bones through the skin, we couldn't use convenient straps to attach it to the actor. It was not an easy thing to develop and trouble shoot. But the finished prop was amazing; it was light, allowed full mobility and looked awesome with the pistons extending and contracting, particularly the back and shoulders. 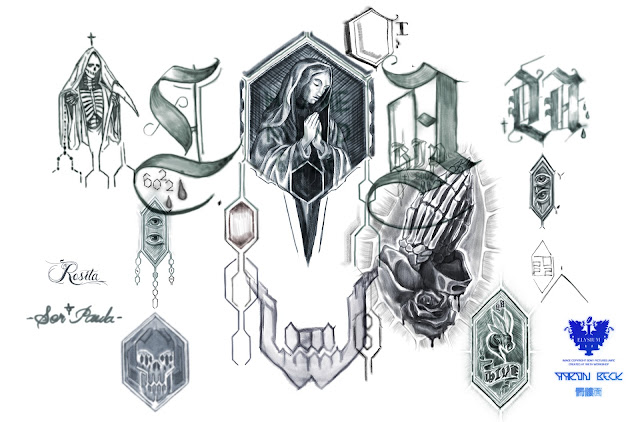 These were some of the tattoo designs I did for Max. I find it pretty cool that so many of these and indeed the overall art direction for all the gang tattoos came about when I was quickly finishing my first design of the project. The brief for that character was for an MS 13 style gangster operating out of an area of the city known as the hive, named after a massive super structure of housing units. So when it came to the necessary tattoos I ran with that idea and created a honey comb look of hexagonal patches with various Latin and religious design elements. Plus you just can't beat the humble old hexagon for making stuff look futuristic.
Posted by Aaron Beck at 2:17 AM 13 comments: 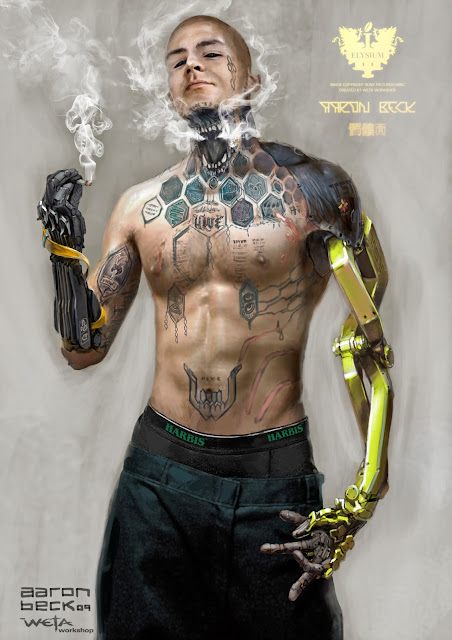 This image was my very first design on the first day of working on Elysium. Man the first 6 months of that project are without a doubt my favourite time as a designer. Each day or week the brief would be something like: 'MS 13 style gangster with robotic arms to replace those lost in a car accident', or 'brutal big prototype military synthetic fighting unit', or 'sexy robot lingerie model'... I shit you not. And I got paid too! If you check out the build website for my car project then those choice bits of mechanical hardware were paid for by drawing robots. Barely!

One of this fulla's arms is like a couple big links of a gold chain, and his hand can make hardcore intricate gang signs. He's being all tough-guy cool and exhaling the smoke through a couple ports in his neck that are controlled by his thoughts. Oh, that's an animated dog snarl tattoo too. Mean as cuz!

I hope to post heaps more concept art from the film once we get clearance, get ready for lots of nerdy explanations about how the designs work.

This image is all over the internet, so hopefully it's cool to post here.
Image copyright Sony pictures / MRC
Posted by Aaron Beck at 1:32 AM 19 comments: