A Work In Progress 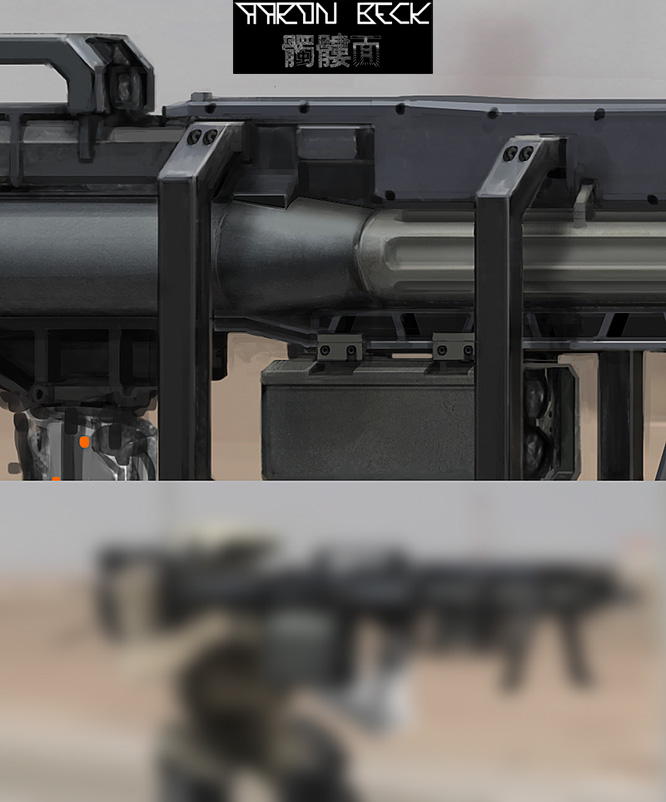 I don't really do this normally, but here's an early WIP of one of the pieces I'm working on for my future book project. I gotta reserve some exclusive art so that people will buy it instead of just saving the art from the internet right? So while this is all I can show here, rest assured that the book will have heaps of new stuff! And not just 'military robot with gun' designs either, not that there's anything wrong with them right?!


Look out for the kickstarter video and campaign for the book around July! I got big plans for this book, gonna be epic! And it's just the first step towards some much bigger projects in the future, the first few of which are already in the works!
Posted by Aaron Beck at 10:40 PM 16 comments: 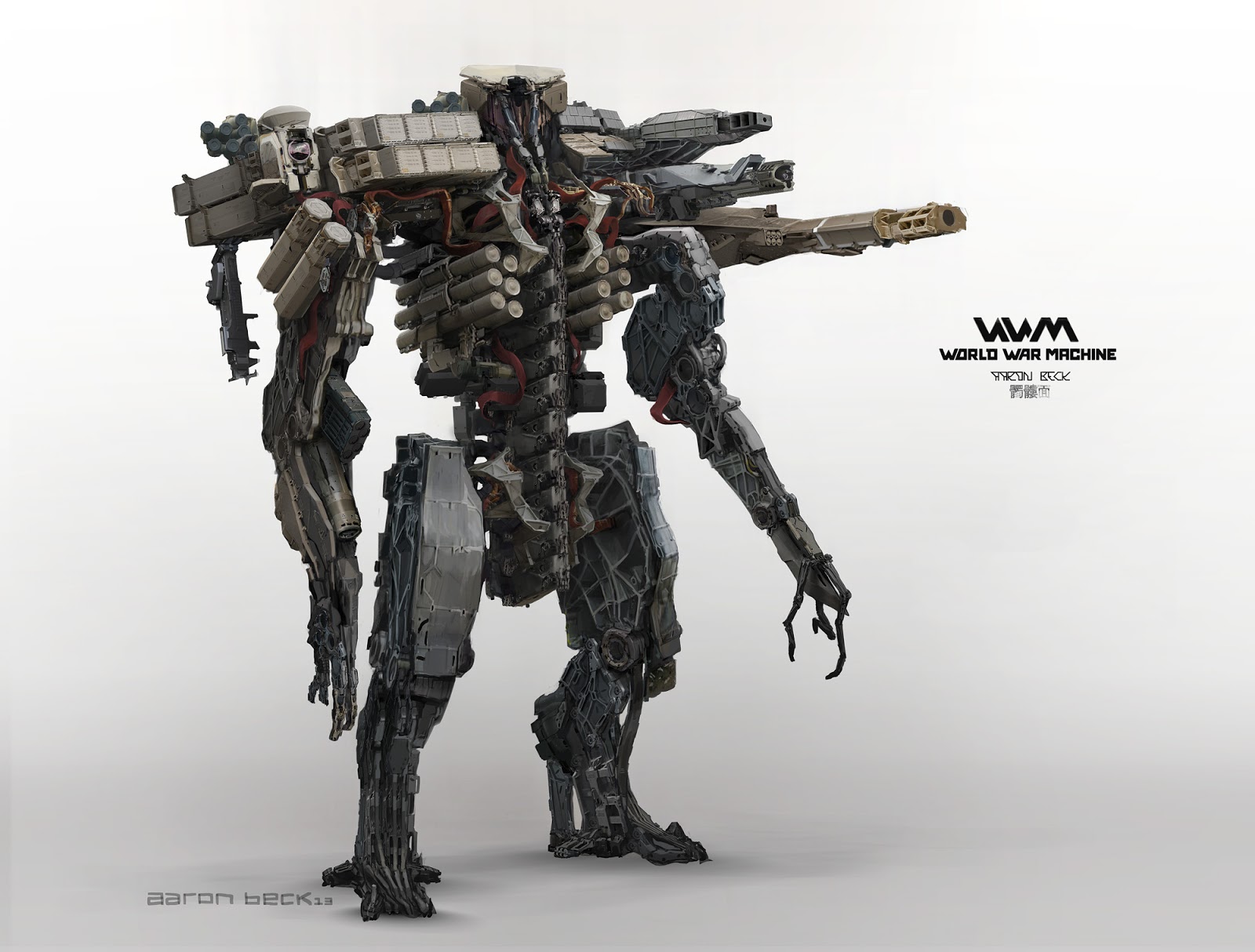 Here's some more artwork from World War Machine. First up a higher res version of the initial design for the player character, the quintessential War Machine. I had a lot of fun working on this friendly chap!

And here are a bunch of quick conceptual sketches for a variety of enemy units. My thinking with these was to push the anatomically inspired biomechanical feel of the War Machine into something more twisted and deformed. The various shattered AI remnants of humanity are at perpetual war with themselves, and create these machines to wage their battles. Attack types and methods of movement and combat are drawn from the broken and disjointed totality of human knowledge that's contained in the AIs, from militaristic science to the animal kingdom. Robot zombies if you will! 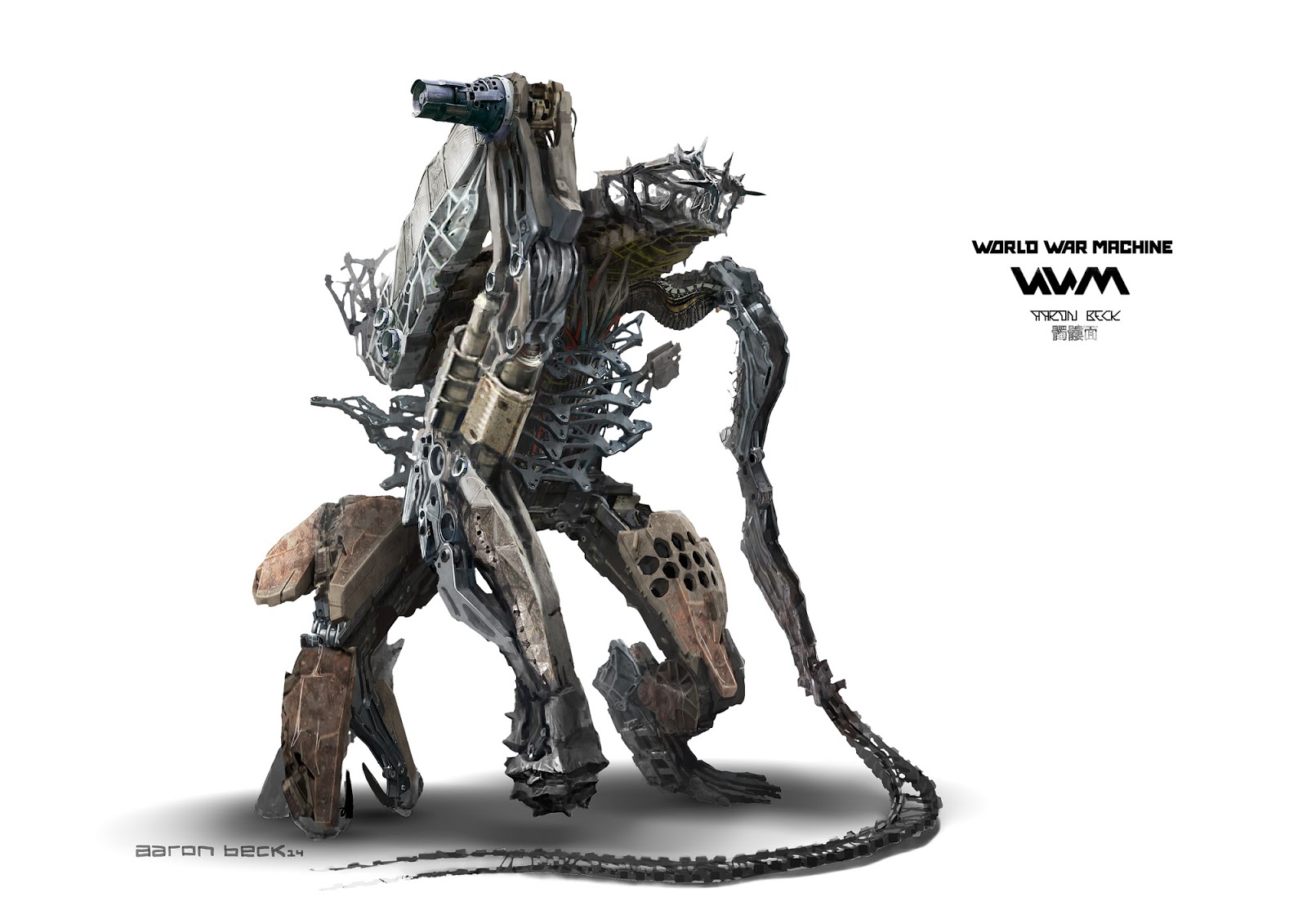 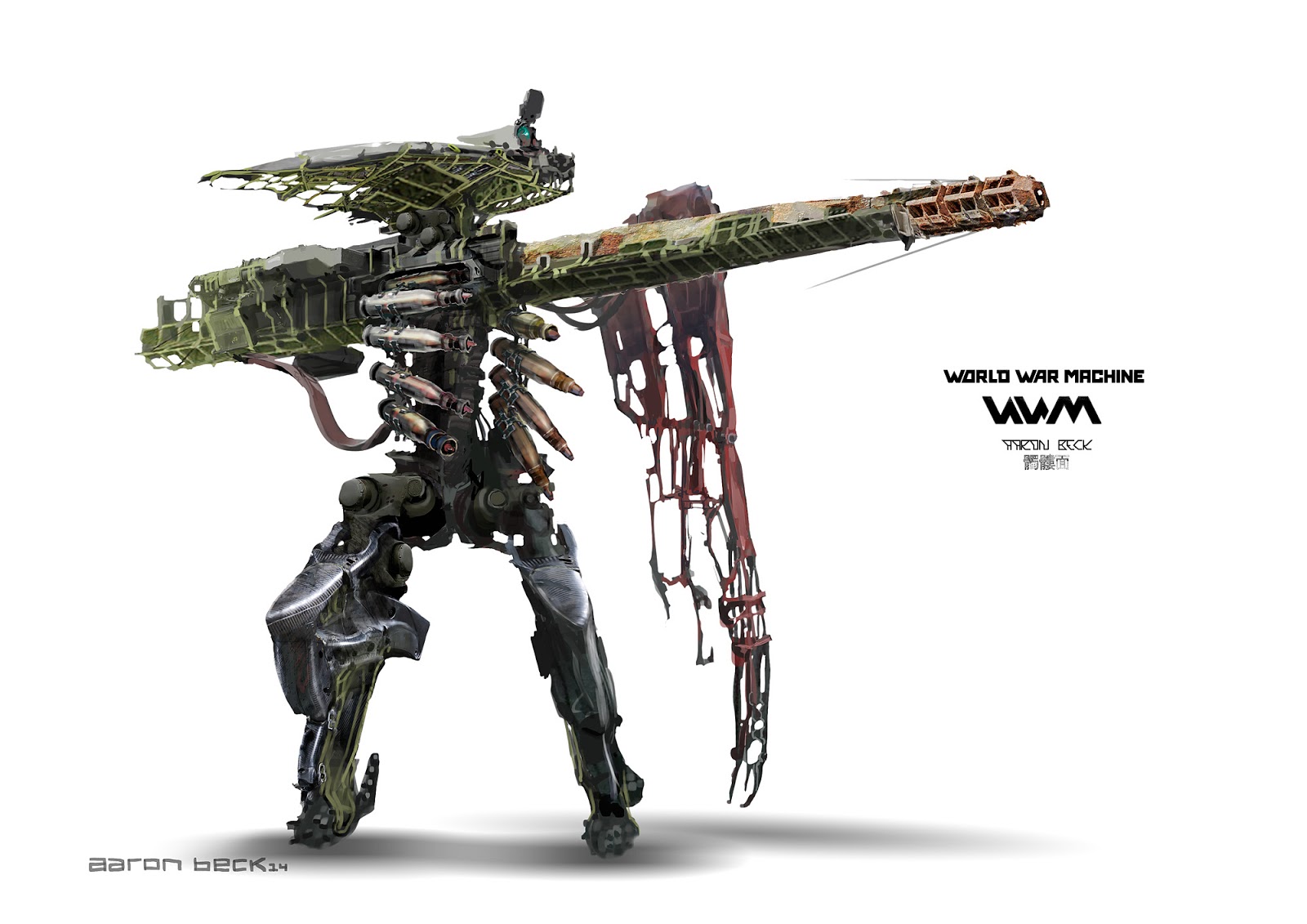 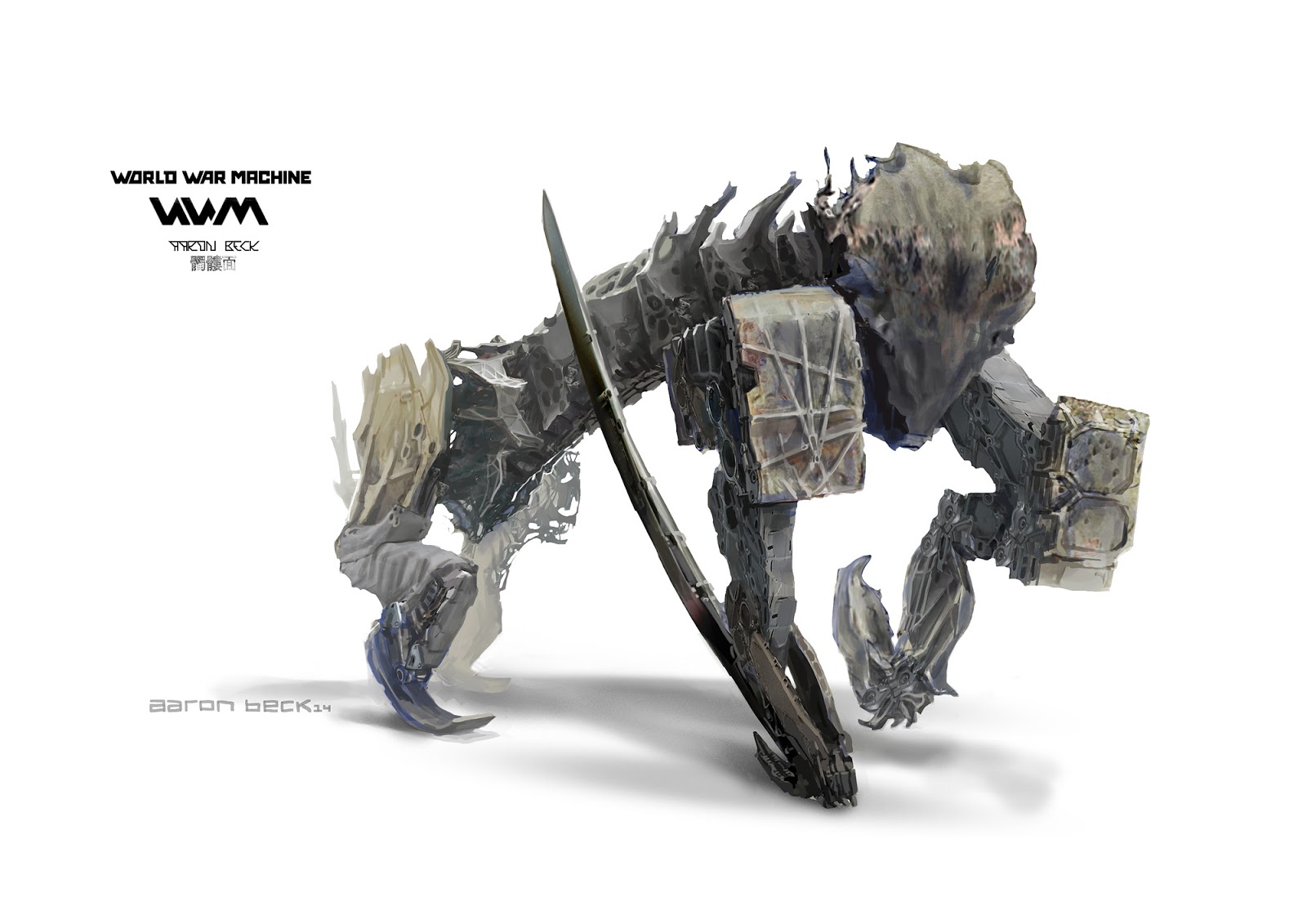 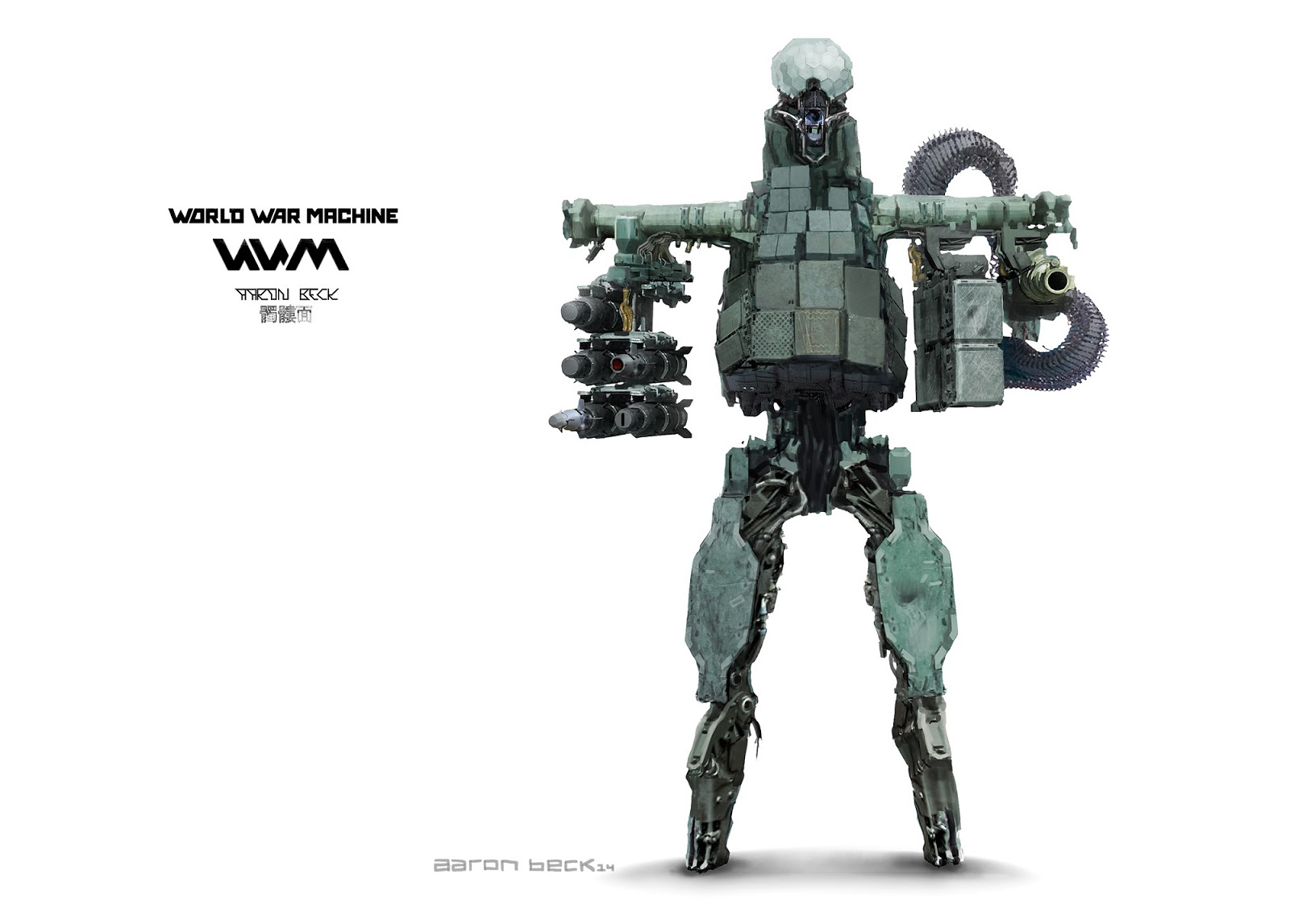 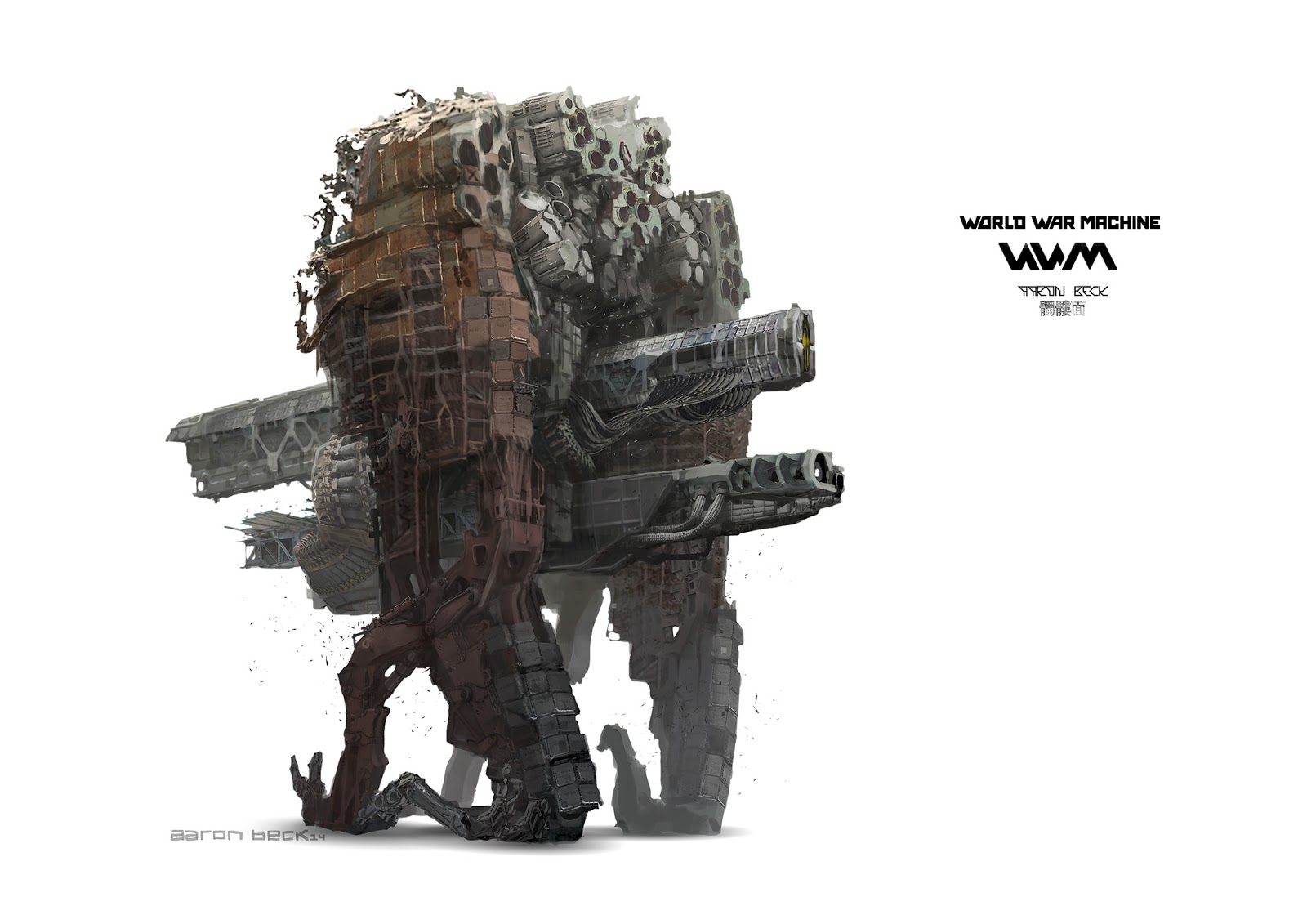 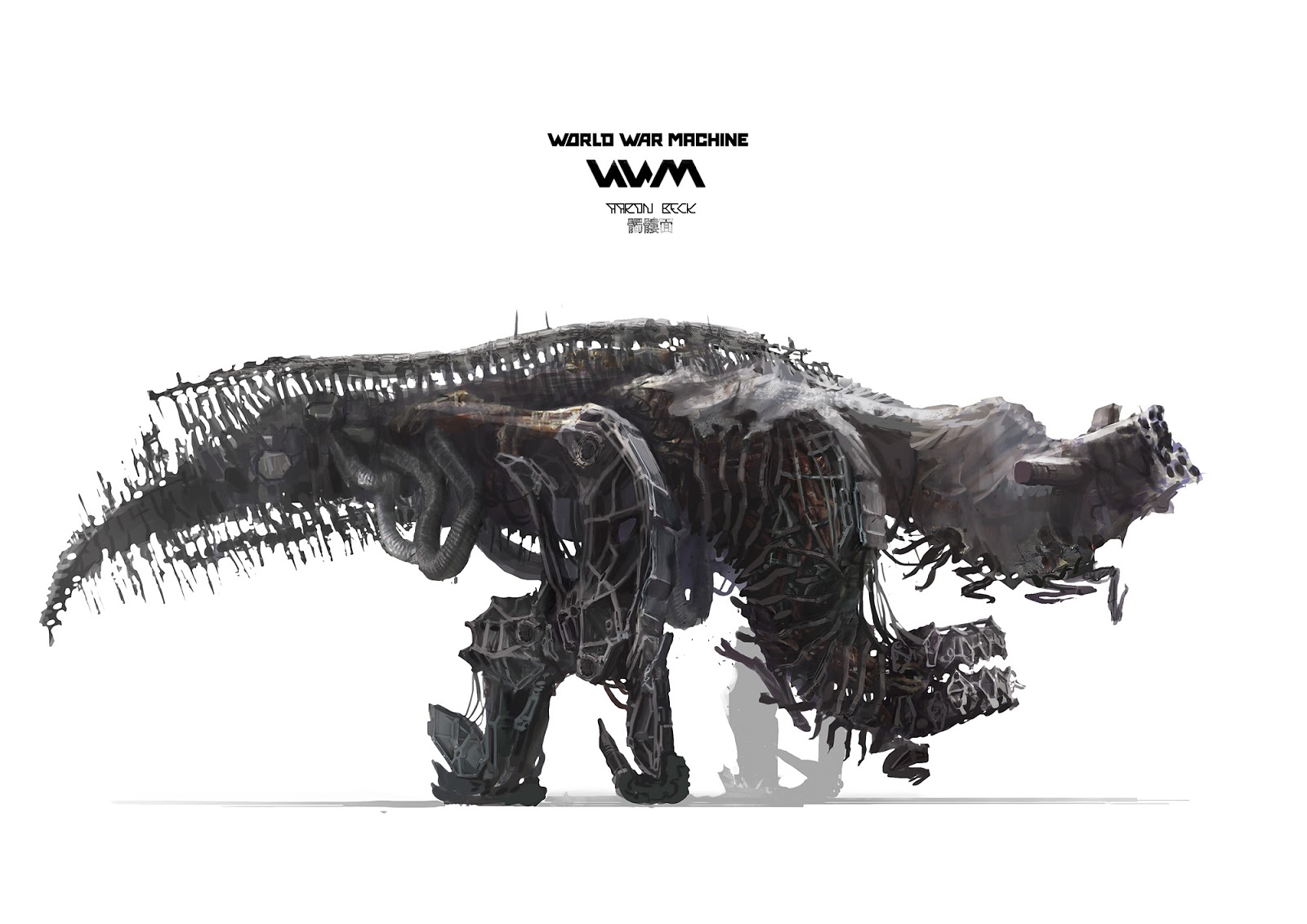 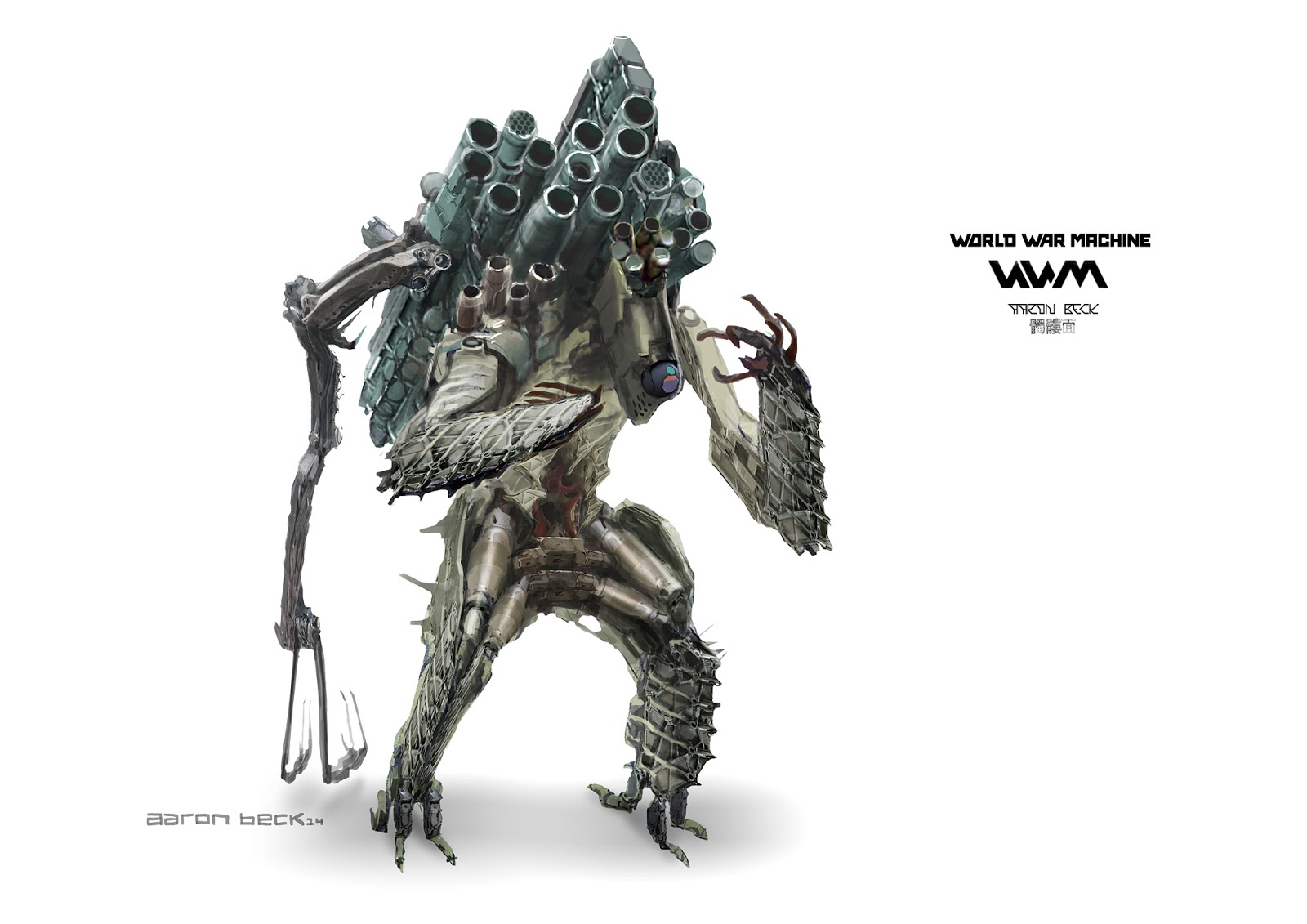 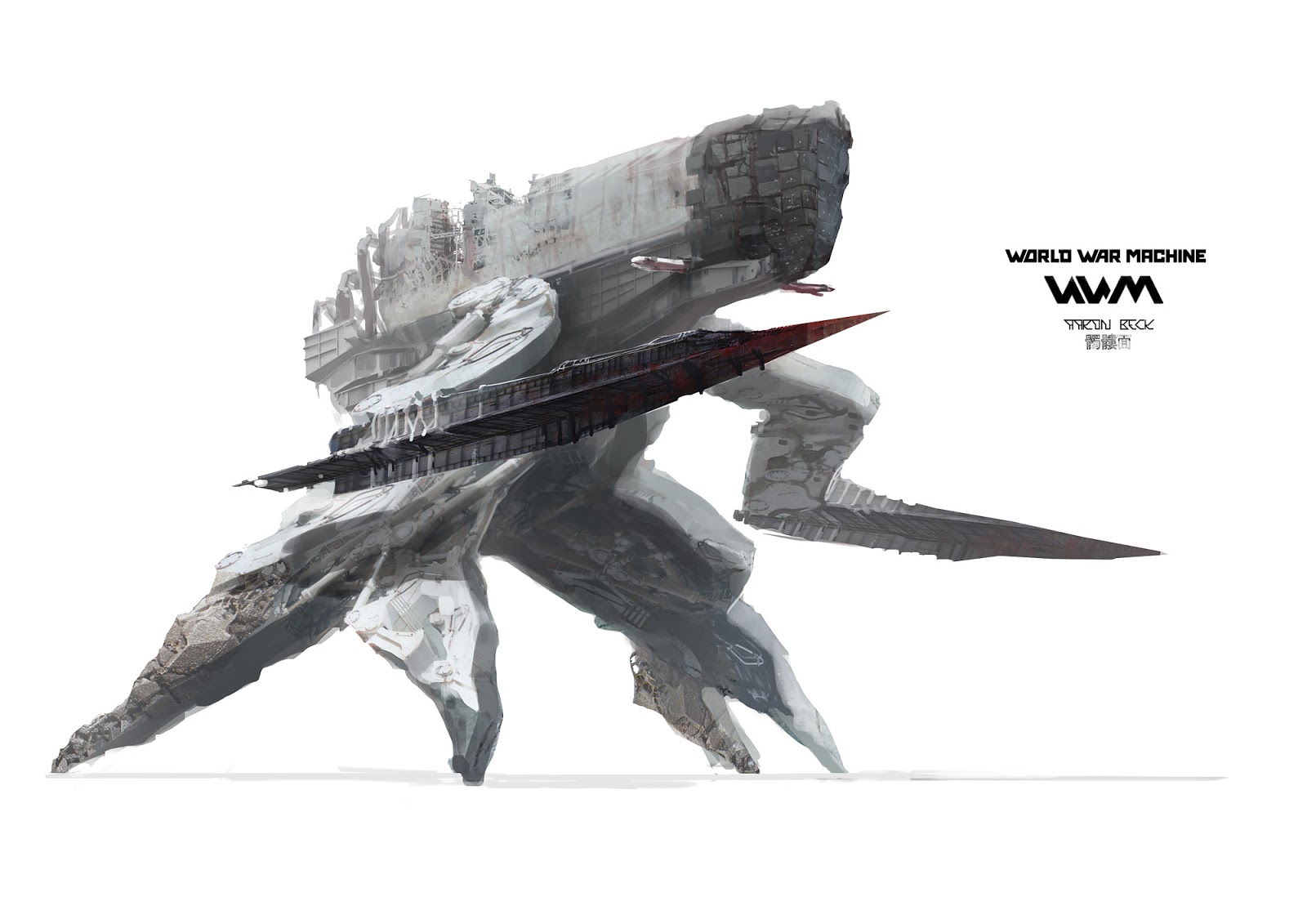 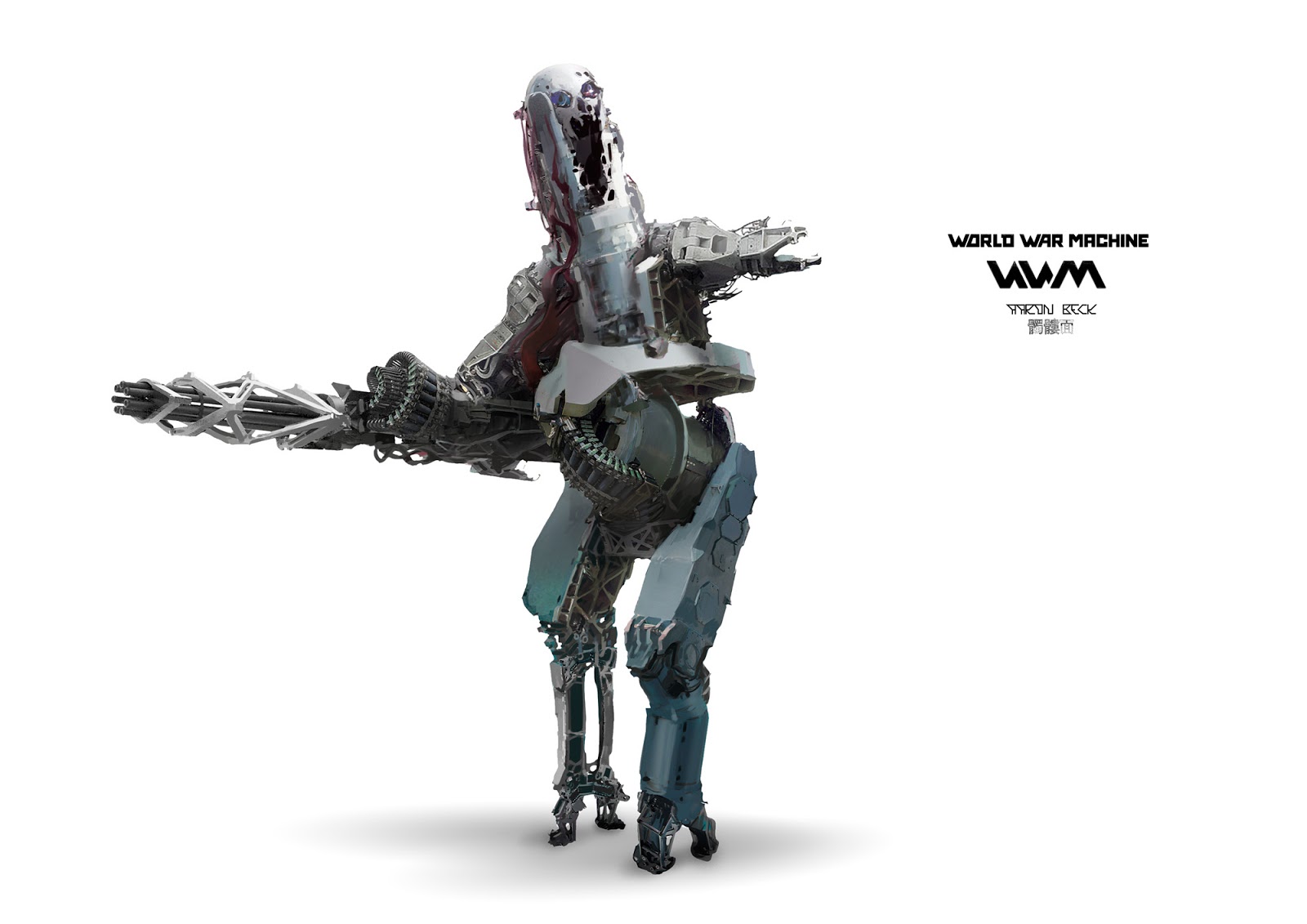 Check out the Square Enix Collective War Machine page and put in a vote!
Posted by Aaron Beck at 3:17 AM 63 comments:

Here's one of the fun freelance jobs I've been working on lately, meet the War Machine! This is the initial design for the player character for 'World War Machine', a game in early pre-production, be sure to check out the pitch page.

The basic idea is that after a future cataclysm there is perpetual war between the shattered remnants of humanity, in the form of these war machines. I wanted to explore this idea through robotics design that has a biomechanical feel, and shows hints of the lost humanity that created them. Milled metal forms take on bone and cellular structural forms, ribbon cables connecting componentry mimic nerves and vascular systems. Kind of like an anatomically inspired skinned robot. Lots of fun to develop! Big thanks to Jeff and the team at Tuque Games for letting me try something different! I'll post some more images from this project soon.
Posted by Aaron Beck at 10:37 PM 16 comments: